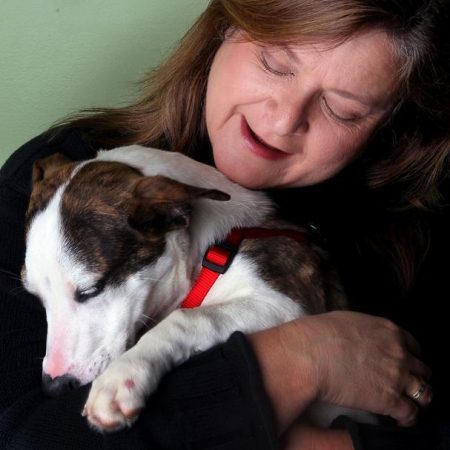 Rebecca Guinn left behind a successful law career after visiting a county shelter where the majority of animals had been euthanized. Thinking there had to be a better way for a community to address its homeless pet population, she founded LifeLine Animal Project in 2002 and implemented a long-term strategy to redefine metro Atlanta's practices and philosophies regarding caring for companion animals. In 2013, LifeLine was awarded the management contracts for Atlanta's Fulton and DeKalb County animal shelters, where the organization has more than doubled life saving rates and positioned Atlanta to become a No Kill community.

Under Rebecca's leadership, LifeLine also operates its own No Kill shelter, which focuses on animals with special medical or behavioral needs. LifeLine's community cat program, the first and largest organized trap-neuter-return assistance program in Atlanta, has sterilized and vaccinated over 37,000 community cats. As an extension of this program, LifeLine also provides free vaccines, spay/neuter, and other assistance to thousands of pets belonging to low-income Atlantans. Additionally, two LifeLine spay and neuter clinics comprise the largest spay/neuter provider in Georgia, having performed over 120,000 surgeries to date.

As a licensed attorney, Rebecca drafted state legislation that banned the use of gas chambers in Georgia shelters and worked to revise animal ordinances in Fulton and DeKalb counties. She is active in the animal law section of the state bar of Georgia and is a member of Best Friends Animal Society's No Kill 2025 National Steering Committee. Rebecca and her partner share their home with four dogs and a number of cats.

Pets are Family: Community Programs to Keep Pets Out of the Shelter

Rebecca Guinn, Lifeline Animal Project CEO, shares about current community programs in Atlanta focused on keeping pets and people together. Stories from how past experiences and initiatives have shaped some of the most innovative ideas for community programs in the country. Leave with ideas to take back to your community and build, immediately.

Imagining the Future of Animal Welfare

Hear from some of the most influential voices in animal welfare as they imagine what the future holds for homeless pets.