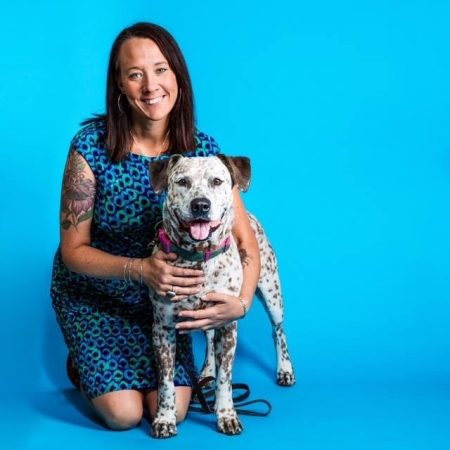 Kristen Hassen-Auerbach is the Director of Pima Animal Care Center, Pima County’s only open-admissions animal shelter which takes in 17,000 homeless, lost and abandoned pets annually and serves 15,000 animals through animal protection and outreach services. Under her direction, PACC is saving more than 90 percent of the cats and dogs who come to the shelter including orphaned puppies and kittens, pets recovering from illness and injuries, and animals who have been victims of cruelty or neglect. In 2017, she oversaw the opening of the newly-constructed state-of-the-art, animal services facility. Under her leadership, PACC partners with hundreds of rescue and community groups and engages thousands of volunteers and foster families to help achieve its mission.

Kristen has received national recognition for her innovative, lifesaving programs. At PACC, she’s created the largest pet foster care program in the United States, with nearly 5,000 animals sent to foster just this year. Because of the success of this program, PACC received a large grant to lead a training initiative that funds dozens of shelters around the U.S. to attend four-day ‘apprenticeships’ to learn about PACC programs and operations. Outside the shelter, Kristen has developed partnerships to build a community outreach program focused on providing resources for pets owned by people facing homelessness and extreme poverty. Kristen also presents and writes regularly on a variety of subjects, including breed labeling, reduction of shelter intake, innovative foster care and social media for animal welfare leadership. Her efforts have been featured in numerous national publications and websites, such as Animal Sheltering magazine, the Huffington Post, BarkPost, the Dodo and Buzzfeed, and on TV networks, including CNN, Fox and ABC. Kristen formerly served as the Deputy Director at Austin Animal Center in Austin, Texas as well as the Assistant Director at the Fairfax County Animal Shelter in Fairfax, Virginia.

No Kill. No Harm. An Ethic for the Future of Lifesaving

Opening Remarks: Disrupt the Past, Rebuild the Future

Join attorney Ryan Clinton, founder of Fix Austin, as he kicks off the conference by laying the bricks for what we mean when we say the broken foundation of animal sheltering. At the end of the session be ready to disrupt the past and spend the next three days imagining how you can rebuild the future for homeless pets.

The Future of Animal Shelter Data

Join us for a conversation with Paula Powell, director El Paso Animal Services, led by Kristen Hassen-Auerbach. Paula Powell leads an animal shelter in one of the most challenging cities in America. With an annual intake of over 26,000 animals, this session will shed light on the last 2 years as Paula fights for animals and the people who love them.

Lunch, Awards, and Closing General Session: ﻿What Pets Deserve a Radical Rethinking of the Role of Animal Welfare

Imagining the Future of Animal Welfare

Hear from some of the most influential voices in animal welfare as they imagine what the future holds for homeless pets.

Get Your Boss to Say Yes!: Piloting New Programs in Shelters Workshop

New ideas can be scary for leaders. Follow these steps and be ready to take an idea to your boss and hear 'yes!'