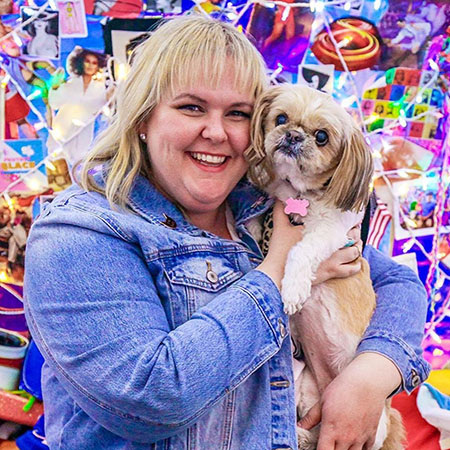 Kasey Spain is the Maddie’s® Marketing and Communications Senior Manager for American Pets Alive!. With a background in graphic design and branding, Kasey has worked with businesses such as Neiman Marcus, Lincoln Property Company, Chuy’s, Choctaw Casinos, TIGI Haircare and many more. Because of her passion for animals, Kasey was recruited to the City of Austin in 2013 to serve as the first Marketing Manager at Austin Animal Center. When she entered the new role at AAC, there was no marketing department, strategy and very little social media presence or messaging around what Austin was doing toward no-kill from the municipal shelter perspective. Kasey’s design-centered approach has been disruptive to animal sheltering in Austin. After just three years, Kasey had built a thriving Marketing department with numerous corporate sponsored events, over 130,000 followers across social media platforms, had designed and rolled out numerous adoption and prevention campaigns, new signage for the flow of the shelter and had increased donations to over $300,000 per year. Adoption numbers had increased by upward of 200 animals a month and intake reduced by over 2,000 in three years. In her role with American Pets Alive!, Kasey drove the 2020 AmPA! Conference to success by increasing awareness, attendees and ticket sales by 15% from the previous year and helped to raise more than $222,000 in just six months.